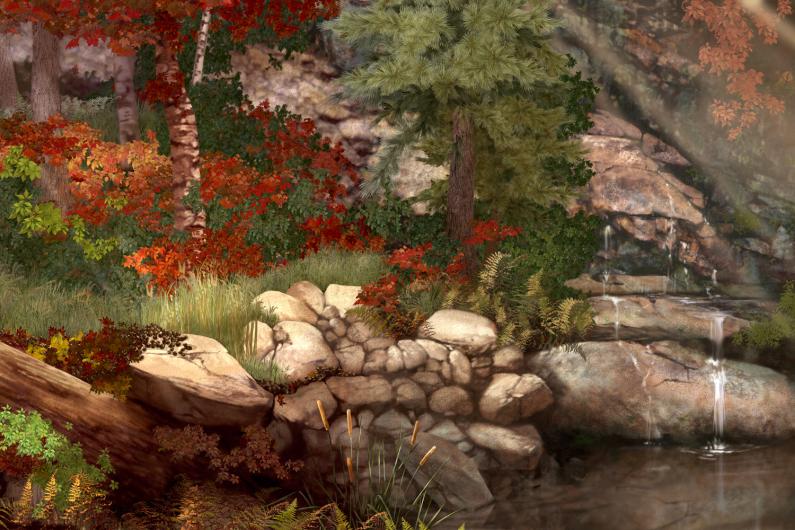 How do animals respond to habitat changes?

Lesson 2. How would the six animals we studied have responded to changes in their habitat at Gray?

There are three primary ways that animals respond to major changes in their habitats: adaptation, migration, extinction. Many animals will try to adapt to small-scale changes in their environment and continue to live within the habitat. These changes might include seasonal fluctuations in precipation or minor changes in average temperature. Some animals are better at adapting than others and can continue to live in an environment that is undergoing major habitat changes, such as deforestation, severe and prolonged drought, or significant changes in temperature.

If an animal cannot survive in their changing habitat, they may try to move, or migrate, to a new habitat that is similar to what they are used to. If the new habitat meets most or all of the animal's habitat needs, such as shelter, food, space and water requirements, the animal will most likely be able to adapt and live in the new habitat.

However, if an animal can't find a suitable habitat to meet it's needs, either because the habitat no longer exists or the next closest one is too far away, AND, if that animal can't adapt to the changes in its current habitat, then it will die. When this happens to an entire species, the species dies out and goes extinct. This has happened frequently over the history of our planet, and continues to happen to species today.

In the last lesson, you looked at how the habitat has changed in Gray, TN between the late Pliocene, when the animals we studied were living there, and today. To better understand how these animals would have responded to changes in the temperature, precipitation and/or tree coverage in their habitat, you will run different simulations in the Scratch program below.

There are three main parameters you can change: Climate (hot, cold, temperate), Coverage (dense, sparse, none), and Precipation (wet, dry). Climate refers to the overall annual temperature at the site. Hot temperatures indicate hot summers and warm winters; cold temperatures indicate cool summers and cold winters; temperate temperatures indicate warm summers and cool winters. Coverage refers to the presence and density of trees growing at the site. Dense coverage indicates lots of trees, like you might find in a forest. Sparse coverage indicates fewer trees mixed with low-growing vegetation, such as in a deciduous forest. No coverage indicates that there are no trees growing in a habitat, such as in a grassland or desert. Finally, precipation refers to how much rain a habitat receives. A wet habitat would receive plenty of rainfall, whereas a dry habitat would receive little to no rainfall.

The types of habitats you might create through this simulation include deserts, grassland, tundra, boreal forests, deciduous forests, and wetlands. 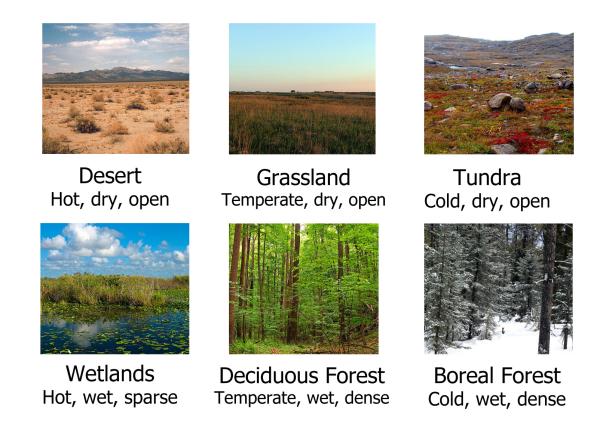 To begin, hover the mouse over the black bar on the left side of the project to expand the parameter menu.  Select the climate, coverage and precipitation type you'd like to run for the model by clicking on the heading (e.g., Climate) and then clicking the parameter (e.g., Hot), then click Go. For reference, the starting parameters are Hot, Dense and Wet. When you run the model, you should notice that the central tile, representing the habitat at Gray, changes to reflect the new habitat. For instance, if you select Hot, Sparse and Dry and then hit Go, the central tile will change from the Pliocene Gray habitat to a desert habitat. Likewise, the avatars of the six animals we've studied will react to the new habitat by either adapting to the local changes, moving to a more suitable habitat nearby, or going extinct.To reset the parameters and run a new model, click the green flag in the upper left corner of the model, then select your new parameters and hit go. Use the worksheet below to keep track of how the different animal species responded to your habitat selections.

Although the realty of this overall system is more complex than we've represented in this model, this project allows you to play with general concepts of habitat change and explore how different animals react to those changes. Once you've run a model, think back to the habitat requirements of the six animals you've studied, and compare that to how the animals responded to your modeled habitat change. Did they behave like you expected?

To see the code behind this Scratch project, or to run it in a full window, you can visit our project page on Scratch:  https://scratch.mit.edu/projects/569402583/

This Scratch project was created for the Gray Fossil Site and Museum by robo512, a 7th grade student in Johnson City, TN.