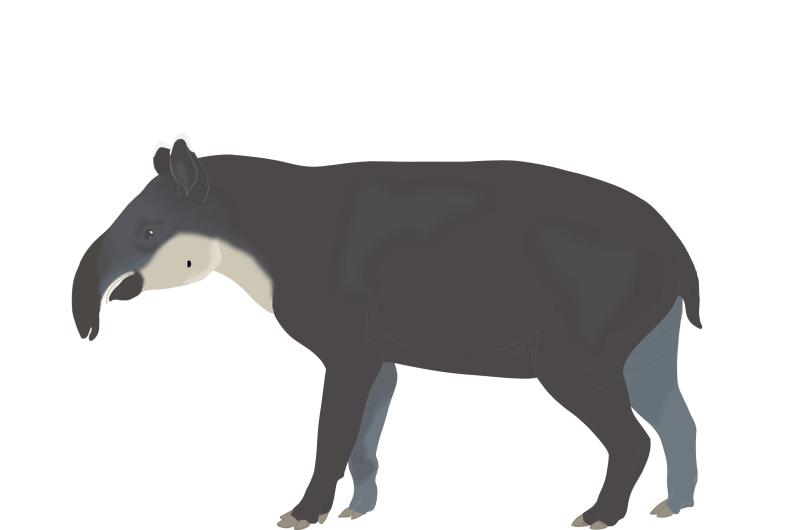 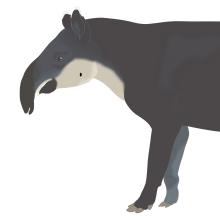 Tapirs are land-dwelling animals, but they love to swim! They spend lots of time in the water, keeping cool and staying away from predators on land. When it comes time to eat, they make their way onto land to chow down on leafy greens. At the ancient habitat of the Gray Fossil Site, there was plenty of food to eat in the ancient forest and plenty of space to swim in the pond. More than 100 fossil tapirs have been found at the Gray Fossil Site, more than any other fossil site in the world, so this must have been an excellent habitat for them.

The dwarf tapirs of Gray are only known from fossil sites that had high temperature and high precipitation. These climate conditions were important for the tapirs, who like it warm and wet, but also for the plants they like to eat.

Tapirs are herbivores, and paleontologists can study the shape of fossilized teeth to figure out what kind of plants ancient herbivores liked most. The Gray Fossil Site tapirs have teeth shaped for browsing, meaning they ate mostly leafy plants instead of grassy plants. The ancient forest of Gray was home to many leafy plants, including hickory and oak trees. One fossil tapir at Gray was discovered with hickory seeds fossilized inside its body, the remains of its last meal!

Tapirs belong to a group called perissodactyls, which also include horses and rhinos. Today, there are four living species of tapirs. Baird’s tapirs, Lowland tapirs, and Mountain tapirs all live in the forests and wetlands of South and Central America. Malay tapirs live in forests and wetlands in Malaysia, which is in southeastern Asia.

Most tapir species today are considered Endangered. Their biggest threat is the loss of their habitats when humans tear down forests and wetlands to make space for farming or cities. Humans also destroy these habitats when they harvest trees for wood.

This video provides an overview of our scientists' understanding of the extinct tapirs at the Gray Fossil Site.