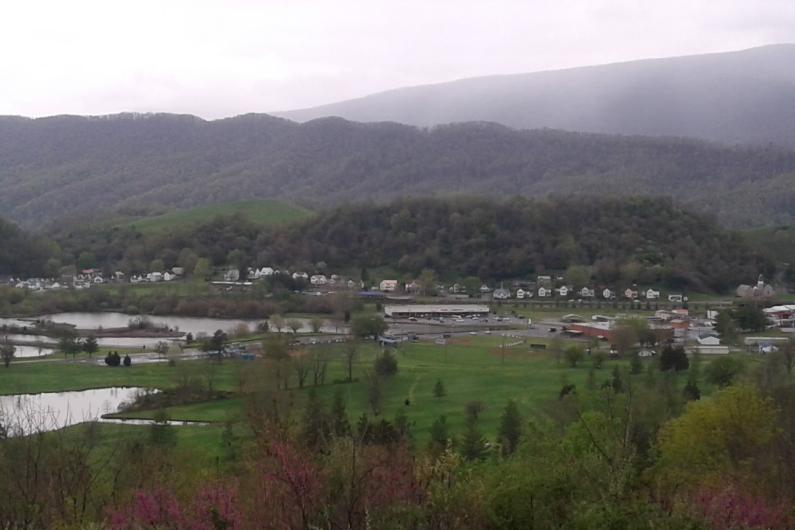 The Saltville Valley in southwest Virginia is famous for its salt wells, but for paleontologists it’s also a rich source of Ice Age fossils. During the Late Pleistocene Epoch, between around 40,000 and 10,000 years ago, the area was home to mammoths, ground sloths, giant short-faced bears, and more animals whose fossils have been excavated from the site. This was a time period of dramatic ecological changes, covering the transition from the cold, dry Last Glacial Maximum to the end of the Ice Age when humans made their first appearance in the Americas and many key animal species became extinct. Scientific research at Saltville offers Appalachian insights into this crucial time in North American history. 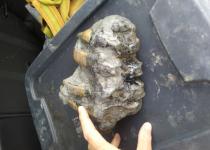 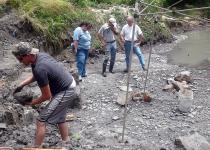 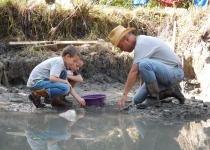 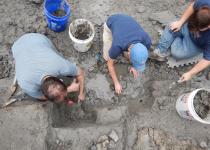 ETSU scientists have been excavating and researching fossils from Saltville for many years, but the history of fossil exploration of the site goes back to the 18th century. Saltville fossils were among the many scientific curiosities that Thomas Jefferson wrote about in the late 1700s. Much later, in the early 1900s, new excavations at Saltville were led by paleontologists from the Carnegie Museum in Pittsburgh searching for remains of Ice Age megafauna. Since then, scientists have come to work at Saltville from a variety of other institutions including the Smithsonian Institution, Virginia Tech, Emory & Henry College, and East Tennessee State University.

Paleontologists from ETSU’s Center of Excellence in Paleontology joined the Saltville excavations in 2003 in close collaboration with the Museum of the Middle Appalachians in downtown Saltville. Digging at Saltville can be challenging, as the fossil-bearing deposits are inundated with salty water. Each day of the summer dig season, the crew has to drain the pits before working through the muddy layers of ancient sediment. But the fossils are worth the trouble!

ETSU paleontologists are most interested in the youngest layers at Saltville, representing the very end of the Pleistocene Epoch. Dr. Blaine Schubert has been particularly excited about fossils of the giant short-faced bear Arctodus simus. It was of the largest bears the world has ever seen, but its fossils are rare in the southeastern United States. So far, evidence of this bear at Saltville has come from bones and teeth, as well as bite marks on mammoth fossils! Beyond the bear, ETSU researchers are also interested in exploring how the environment at Saltville changed as the Ice Age drew to a close.

It’s not just ETSU scientists benefitting from Saltville excavations. In the summer, our crew helps to organize digs for the public, including students from elementary school to college. The site offers great opportunities for ETSU students to get involved in research and public outreach.

What ancient species lived at Saltville?

Learn more about ongoing research at Saltville in our Research section.