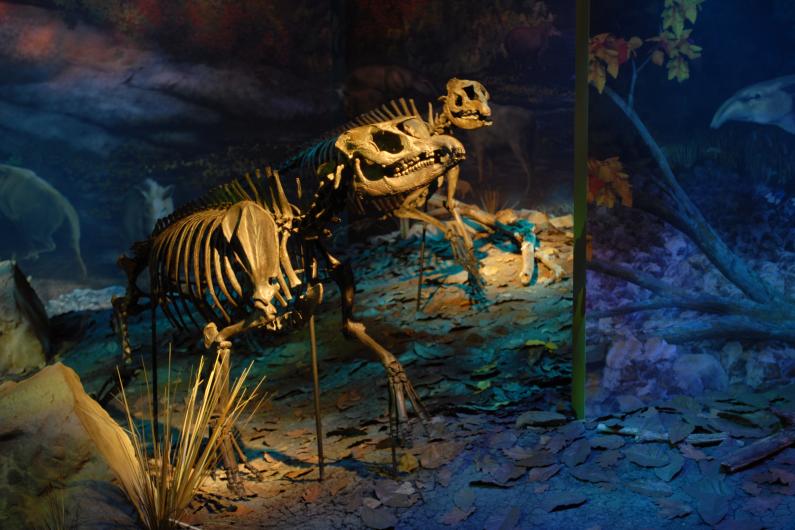 Located in the town of Gray in East Tennessee, the Gray Fossil Site preserves the remains of a forested pond ecosystem that existed around 4.5-5 million years ago during the Early Pliocene Epoch. Excavations at this site have recovered fossils of around 200 species of animals and plants buried in an ancient sinkhole-pond. They reveal a forest dominated by oak, hickory, and pine trees and home to tapirs, rhinos, alligators, mastodons, and more. At that time East Tennessee had a slightly warmer climate compared to today.

As the only known fossil site of its age in the Appalachian Highlands, the Gray Fossil Site offers a one-of-a-kind window into the history of the area. The site also benefits from being located just a few minutes off of Interstate 26 and only a short drive from the ETSU campus. Museum staff conduct field work for several months of the year and lab work all year round, and the museum is a popular attraction for the local community and tourists. More than 30,000 fossils have been cataloged from the site, including several extinct species that are new to science.

How was the site formed?

Most of the rock in the surrounding area is limestone laid down under shallow ocean water during the Ordovician, 480 million years ago. In the Early Pliocene, around 5 million years ago, a sinkhole formed in this limestone and became filled with water. For thousands of years, this pond was surrounded by an ancient forest and served as home to many aquatic species like turtles and fish, while many other animals visited the pond to drink. Over many years sediments filled the pond, collecting plants and animals that died and were subsequently buried, creating a time capsule sealed away in the mud.

Today, the pond is long gone. The high limestone walls of the sinkhole have weathered away and the sinkhole is entirely filled-in with those mud layers that now make up the clay of the Gray Fossil Site. In total, the clay deposit is roughly five acres in area and more than 100 feet (30 meters) deep. The bones, teeth, and other organic remains that were buried in those mud layers are now fossils, the only clues to the Pliocene ecosystem that once thrived here.

How was the site discovered?

Like many fossil localities, the Gray Fossil Site was discovered by accident. In the year 2000, a Tennessee Department of Transportation (TDOT) construction crew exposed the black clay of the site during a road reconstruction project. Construction continued for several months while scientists examined the fossils unearthed by the crew until it became clear just how unique and fossil-rich the site was. With the support of Governor Don Sundquist and ETSU President Paul Stanton, the road construction was moved and grant money was allocated for the construction of the museum. The Gray Fossil Site & Museum opened its doors in 2007.

The Gray Fossil Site is now operated by East Tennessee State University, and is home to the Gray Fossil Site & Museum. Shortly after the site’s discovery, the university created a Geosciences department offering a Paleontology Master’s degree program that attracts students from around the world. The museum itself is home to a world-class paleontology program that prepares fossils, curates the collection, and performs research on tens of thousands of fossils from the Gray Site and beyond. Much of this work is publicly visible to the thousands of visitors that stop by the museum each year.

Paleontology at the Gray Fossil Site

If you stand on the balcony behind the museum and look out over the Gray Fossil Site, you’ll see that the ground is marked by excavation pits. From late Spring to early Autumn, a field crew of staff, students, and volunteers work in these pits, digging slowly through ancient pond layers to recover fossils, from turtles to tapirs to mastodons. Elsewhere on the site, other workers pour sediment onto screens and wash away the clay to expose much smaller fossil remains such as the bones of fish and frogs and the seeds and fruits of plants.

Take a walk back inside the museum and you can peer through the windows of our fossil preparation lab. Every fossil found at the Gray Fossil Site goes through this room, where laboratory volunteers, staff, and students clean and reassemble fossils. At microscope stations, our “pickers” sort through small fossils that are found during screen-washing. By the time they’re done in this room, all of the fossils are ready for permanent curation and research.

Next door to the prep lab is the collections room, where our fossils find their new home. Dozens of shelves and cabinets hold tens of thousands of fossils from the Gray Fossil Site and elsewhere. In this stable, climate-controlled environment, the fossils will be safe from deterioration for a long, long time. Here, they’re finally available for research. Scientists from ETSU and all around the world have spent many hours in this room making the observations that have led to the naming of new fossil species and an ever-clearer understanding of ancient Tennessee.

What ancient species lived at the Gray Site?

Over 100 species of ancient animals have been found at the Gray Fossil Site, including large animals like tapirs, rhinos, mastodons, and alligators and small animals like turtles, snakes, frogs, and rodents. Some of the Gray Site’s animal species are new to science, including Pristinailurus bristoli, the only completely-known fossil red panda in the Americas, Gulo sudorus, the oldest known fossil wolverine, and Trachemys haugrudi, an ancient relative of modern slider turtles.

Plants at the Gray Site are also represented by around 100 identified species. The most common plants are oak, hickory, and pine, but the list includes many species of mosses, ferns, conifers, and flowering plants as well. Some of these are new to science, including an extinct species of hickory and three extinct species of grapevine. Many of these plants, including new species, have a striking resemblances to modern Asian plants.

Learn more about ongoing research at the Gray Fossil Site in our Research section.